You are here: Home1 / Geometry

The SL-Deck is a prestressed concrete slab suitable for multilevel residential-, commercial-, and industrial buildings as well as for multilevel car parks. 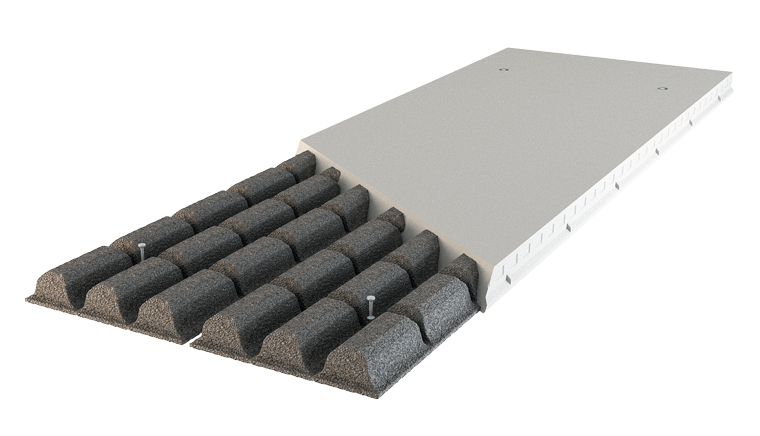 A minimum of 200 mm massive SCC is casted in each end of the slab securing a high ability to handle shear forces in the areas where the slabs are supported. If necessary, additional reinforcement can be added to the ends of the slabs.

In Denmark, standard SL-Decks are delivered as rectangular slabs with a width of 2.4 meter (2396 mm), but it is possible to establish production of SL-decks with a standard width of up to 3.6 meter. It is possible to deliver the SL-Deck with curved and skewed sides and ends, and by doing so adjust the geometry of the slab to the shape of the final building. The SL-Deck can also be delivered in any width smaller than the standard width.

In Denmark, SL-Decks are delivered in the following heights:

However, the SL-deck production equipment is made so it is possible to produce any desired height in between.

The surfaces (top and bottom) are both made with a smooth solid finish.

However, the undersurface of the SL-Deck can also be produced with an porous structure providing the slab with a sound dampening effect on the room below.

The SL-Deck is casted on steel moulds were the sides have been fitted with small blocks, creating recesses on the side of the slab. These recesses work as shear locks after they have been filled with grout during the on-site installation.

The SL-Deck is produced with the following tolerances:

The SL-Deck can be delivered with a large variety of openings as long as attention is paid to the placement of the steel reinforcement and the load carrying capacity of the individual slab and of the final structure.

The openings are made by placing opening molds on the casting lanes before the light-weight concrete is casted.